My family has always believed that a house is not a home without pets.

My parents' first child was their fur-baby, Bailey. They had her from the time she was a small kitten, a few years before I was born. Bailey was my guardian and protector from the moment I was brought home from the hospital. She often sat next to my bassinet and watched to make sure that no one disturbed me as I slept (grandparents weren't thrilled when she hissed at them haha). 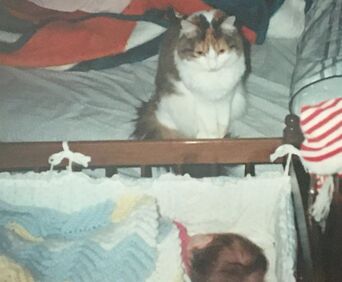 Bailey watching over me as an infant 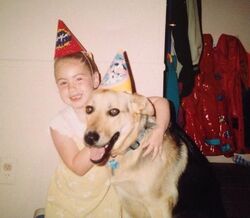 My first dog, Maxie
We've had numerous pets in our home since Bailey. We've always been the family who believes in pets being part of the family, from laying on the couch with us to celebrating animal birthdays!

​We currently have five pets at home, three dogs and two cats. Their crazy antics keep us laughing, so much so that we started an Instagram account for them! ​My little sisters constantly ask me to post new photos on Puppies and Purrs, so it's a family affair. 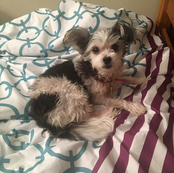 Zola was named for a Disney character who was adopted shortly before she was... Zola Grey Shepherd from Grey's Anatomy!

At ten years old, Zola's hobbies include curling up with her favorite humans, chewing bones, and relaxing during a nice petting session. 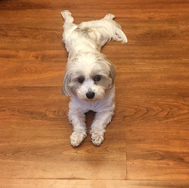 Dash was named for a Disney character who dashes around just as quickly as he does... Dash Parr from The Incredibles!

At four years old, Dash's hobbies include running through the house, playing with his twin sister, ratting his sister out for being where she doesn't belong, and getting belly rubs from his humans. 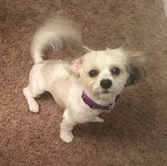 Peri was named for a Disney character who is a twin, just like she is... Tinker Bell's twin, Periwinkle, from The Secret of the Wings!

At four years old, Peri's hobbies include playing with her twin brother, chewing paper like a goat, barking at air, and getting into places she doesn't belong.

Nani is a bobtail kitten. She has black fur with beautiful gold streaks.

Nani was named for a Disney character who is just as nurturing as she is... Lilo's big sister, Nani, from Lilo and Stitch!

At two years old, Nani's hobbies include meowing to hear the sound of her own voice, scratching at her smallest humans' bedroom door so she can be let in to play, and grooming her sister. 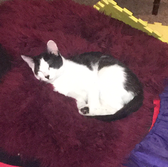 Maya is a bobtail kitten. She has black and white fur and was the runt of her litter.

Maya was named for Disney character who is just as fierce as she is... Maya Bishop, from Station 19! (Although if you ask my mom, she was named after Maya Pope, Olivia's mom, from Scandal. Either way, still a Disney name!)

At two years old, Maya's hobbies include cuddling with her sister, sitting on her humans' shoulders like a parrot, and playing videos on my computer when I'm not looking.
Next Page