A Little About Me

Me & my siblings - 2011
My name is Taylor and I'm 26 years old. I have lived an extraordinary, unique life, as I grew up the only child in a foster/adoptive family. Over the span of eighteen years, I had nineteen foster siblings, five of whom my parents adopted. My entire life has revolved around my family and I always dreamed of growing up to adopt, just as my parents did. I'll touch more on my family later, but first I thought I'd give a little background information on myself.

​​​Growing Up
​I was born on November 2, 1993 and grew up in a small town in New York. Washingtonville is about 90 minutes north of New York City. I had an incredible childhood, including involvement in numerous school clubs and activities, working at the local library, founding a program for special needs children in the community, and enjoying as many trips as possible to the best ice cream place in the world... seriously, if you're ever in Washingonville or the surrounding areas, you need to visit Weir's in the summer. 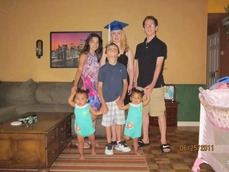 High school graduation - Class of 2011
I was lucky enough to have some amazing friends throughout my childhood and teen years. I'm still in touch with friends from all stages of my life; even though we get busy and don't all live near each other anymore, we make sure that we have time to check in on each other and always support each other through everything.

I graduated high school in 2011. Go Wizards! I was in the top 40 of almost 400 students; school was always one of the most important things in my life. I even attended a technical school for teaching during my junior and senior years, and received top honors (and a scholarship) when I graduated from that school. 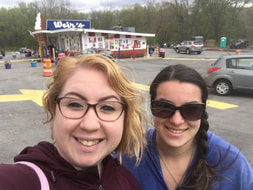 Can you tell how much we love Weir's ice cream?
​I lived in the same house from birth until the summer after I graduated college, in July 2015. At that point, we made the life-changing decision to move to Florida to escape the freezing cold winters that dragged on in New York. In case you were wondering though, when my sister and I went home to visit in April 2019, we did go to Weir's every other day for the whole week I was in Washingtonville!

Moving on from ice cream haha... From the time I was three years old until I was twenty-one, I had nineteen foster siblings come through my house. Being part of a foster family was the best gift that my parents could have given to me. I learned so much about life through my siblings. I'll let you read more about my family on the next page, but know that they're the most important people in my life.

Receiving my diploma!
My parents adopted five of my foster siblings, making me the oldest of six children. I couldn't imagine life without them. My family influenced so much of my life, including the career path that I chose to pursue.

​Education
Partly due to the fact that I had so much experience with children over the course of my lifetime, my only career goal growing up was to become a teacher. After graduating high school, I went on to college at my top choice school, the State University of New York at New Paltz. I majored in Early Childhood/Childhood Education B-6 with a concentration in English and I minored in Deaf Studies. I had followed my dreams and couldn't be prouder when I graduated. 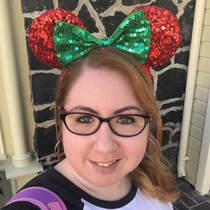 Holiday taping at Magic Kingdom - 2017
My family made the decision to move to Florida when I was between my sophomore and junior years of college. Junior year was when I started taking the classes that put me into elementary schools so I could gain experience. Between what I saw in those schools with the implementation of the Common Core standards, and the fact that I knew we'd be moving, I decided to finish my degree but not become certified to teach in New York. I wasn't happy with the public school system anymore, because I had dreamed of teaching creatively instead of to a test, but I knew that with my degree I could become certified to teach in Florida whenever I wanted.

​Career
That being said, I told my parents that if we were moving to Florida anyway, I wanted to follow another love of mine... my love of Disney! We moved close enough to the Disney area that I could apply to work there as soon as we moved down and had gotten settled. Fast forward to December 1, 2015, and I officially became a Cast Member at Walt Disney World!

I've been with the company for a little over four years now and have absolutely loved it. A love of Disney has been instilled in me since birth; my parents honeymooned at Disney World over 30 years ago and passed on their enjoyment to me! Disney has always been there for me through the good times and the bad... Some of my fondest memories include Disney vacations, or seeing Disney movies for the first time, and Disney has always brightened my spirits. Actually, my very first trip to Disney World was when I was just six years old, when we were mourning the loss of my first foster siblings (they went home to their bio dad), my aunt's tragic passing in a car accident, the loss of my cousins (my uncle took them and left the state after my aunt died), and my grandpa's end to his cancer battle. Just six days after we returned home from that trip, my brother was placed with us and he ended up being the first child whom my parents would adopt!

I'm lucky to work with some amazing people!
I have worked in two locations at Epcot, both in the Food & Beverage industry (which I had never experienced until working at Disney), and have worked my way up in the company. I became a Coordinator, the equivalent of middle management, in May 2018 and have learned so much about the company, and myself, in the process.

​If you live close enough to Disney World, you may be familiar with the fact that Cast Members typically have crazy schedules. One of the perks of my status as a Coordinator means that I typically work the same hours each day of the week. This gives me the chance to still live a relatively normal life despite a career in hospitality, meaning that I'll be able to be home with my future child quite a lot. I also love the flexibility that my company provides; I'm able to request numerous days off throughout the year or switch shifts so I would always have the opportunity to be home with my child for important moments in her life.

Continuing Education
A while back, the Walt Disney Company announced that they would be covering the cost of tuition for Cast Members who wanted to continue their education. I was absolutely thrilled and jumped at the chance to go back to school. I had always dreamed of getting my Master's Degree and if the company would pay for it, that would be great!

I was fortunate to be accepted to the University of Denver and have been taking classes in an online capacity since September 2019. I'll be getting my Master's in Professional Creative Writing with a focus on Fiction. I have already learned so much and look forward to completing the rest of my classes. It'll take a few years since I'm taking just one or two classes at a time, but it will be absolutely worth it!

April 2019
So Much More...
It's difficult to put 26 years worth of life into one little website, but I hope that I've included the most important pieces of my life here for you. I write all of this in hopes of showing you a piece of who I am so that you can get to know me a bit.

You may have noticed that I have not mentioned a boyfriend or husband. I'll be adopting as a single woman, who honestly doesn't have plans to be married anytime soon. I know that many times people think about a happy couple adding to their family and when I started on this journey I was nervous that being single might be a turn-off for expectant parents making adoption plans for their unborn baby. I believe that going through this process on my own shows just how much I want to have a baby, because I'm doing all of the paperwork, research, and planning for a baby alone. I also know that if you learn more about me and about the wonderful support system that I have, you'll see that there's nothing missing by me adopting as a single woman.

​On the next few pages you'll find out more about me, my family, and my hopes for the future.
Next Page