I've loved Disney since infancy!
I guess it's kind of obvious that I love Disney if I work as a Cast Member, but Disney absolutely influences almost every part of my life.

As I mentioned on the page about my pets, they all have Disney names. My dad has been working as a Cast Member since retiring from his job as a plumber (he worked out of the New York City union for over 40 years!) so it's becoming a family affair. My littlest sisters have even talked about working for Disney when they grow up. 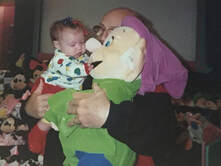 My grandpa supported my love of Disney!
My family loves everything Disney, from watching movies together to spending a day at the Parks.

​It's crazy to think that my younger siblings are growing up just an hour away from Disney World. We now visit the Parks as often as possible. When I was growing up though, we only went on vacation to Disney three times! I'm excited to eventually bring my own children to the Parks as well. 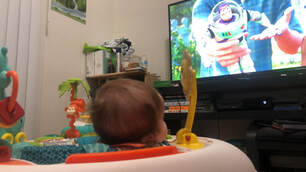 My nephew already loves the Toy Story movies!
My brother has already started sharing our family's love of Disney with my nephew too... at just a few months old, he's already fixated on the television whenever a Disney movie is playing!

I can't wait until I can pass down my family's love of Disney to my own children. I'm excited to introduce my own daughters to my favorite Disney movies and characters someday, and to see which characters they'll love the most. My friends are even excited to share in the Disney fun; they've already talked about visiting the Disney Parks with me and my future children!

Here are some photos to show my love of Disney...
Next Page